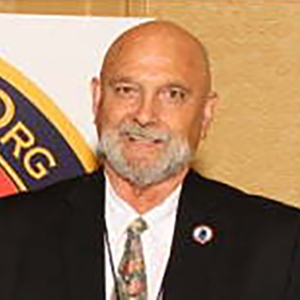 Born and raised in a gun friendly environment in North Central Texas and hunted from an early age. Attended University of Texas at Arlington before joining the US Navy during the Vietnam War. Served from 1967 to 1971, receiving an Honorable Discharge. Moved to Georgia from Texas in 1978.

Spent 35 years in sales, marketing and project management as well as being a practicing farrier for the last 35 years. After becoming increasingly concerned about self-defense and personal protection, heard about GCO in early 2008. Joined and immediately started recruiting members and volunteering as a Gun Show Coordinator. Named Statewide Recruiting Coordinator in May of 2009 and in October of 2009 named GCO’s first Executive Director.

Named to Newsmax 100 most influential gun rights activists in 2015. Honored by the Georgia House of Representatives in 2016 by passage of House Resolution 1864, for his contributions to the preservation of the Second Amendment of the Constitution.

Life Member of GeorgiaCarry.Org, Patron Life Member of the NRA, Georgia Carry Firearms Course Instructor and NRA Certified Pistol Instructor. Married wife Donna in 1971 and remain so today. We have 2 lovely daughters, one granddaughter and one grandson. We operate a therapeutic riding center for persons with special needs in Fairburn, GA.