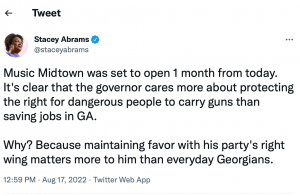 “Those who exercise their 2nd Amendment Rights are not ‘dangerous people.’ In fact, these men and women are often the courageous heroes who save the day when criminals attempt to inflict harm on others.

“Despite threats and name-calling from politicians like Stacey Abrams, our organization will continue to champion gun rights in Georgia and across the United States. We will not back down or give up in the fight for a safer tomorrow.”

GA2A, formerly GeorgiaCarry.org, is Georgia’s premier gun rights organization. The organization works under the Gold Dome – and in the courtroom – to “Shield the 2nd” from those who want to undermine the U.S. Constitution.